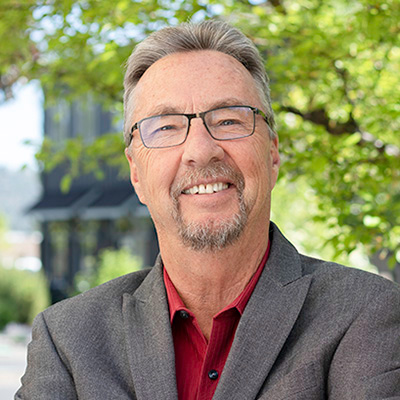 Summary
As a broker with Compass Commercial, Ron is a consistent Top Broker. His skill at marketing, transaction negotiation, and market expertise has enabled him to close hundreds of millions of dollars in real estate transactions ranging from less than $100,000 to over $10 million.

Background & Experience
Ron’s nearly 40 years of experience in real estate began in Portland, Oregon in 1978 after attending law school at the University of Idaho. He has practiced real estate brokerage continuously since then, moving his practice to Bend in 1981. He joined Compass Commercial in 2008, where he has been one of the top producing brokers every year since.

Community Involvement & Interests
Ron was regional Vice President of CCIM Region 1 and a member of the Board of Directors for the CCIM Institute. In his personal time, he spent many years coaching youth basketball and baseball. He served on the City of Bend UGB Boundary Advisory Committee and currently sits on the Professional Standards Committee of the Board of Realtors.

“Through successes and struggles, my burning passion remains helping real estate owners, tenants, investors, brokers and lenders make the most of their real estate experiences.”

Over a nearly 40 year career, there are hundreds of notable transactions. Those most relevant to potential customers and clients would be the most recent.

“Ron and Terry were terrific. Received our questions and concerns graciously and attended to them efficiently and expertly. We sold both our properties very quickly. Their negotiations with the buyers proved to satisfy our concerns and get us our best price. I highly recommend their expertise! They are also gracious and interesting men!” — Eileen Heaton

“There are many reasons why Compass Commercial Real Estate is in a class of its own in Central Oregon. I’ve lived in Bend and owned commercial real estate for year. As the time approached to sell, I received a well written letter from brokers Terry O’Neil and Ron Ross at Compass Commercial. They justified their valuation and laid out every step that they and Compass could offer to affect a sale of my property.
So began a process like none I’d seen before in my over 30 years of working with other real estate firms from San Diego to Bend. For instance, I was sensitive to the needs of my long time tenants. Terry and Ron met with each tenant as though they were an extension of my care and concern.
Once the listing went “live”, it was less than a week before we received an offer close to the full asking price which culminated in a sale. Upon agreeing to a sale price the work really began. To do a transaction like this, it could not be done properly or timely unless the brokerage firm had the depth of resources, knowledge and reputation like Compass.
I can’t say enough about the talent, communication and passion Terry O’Neil and Ron Ross had in assisting me with every move and demand on this sale. I will genuinely remember this great experience and not soon forget the outstanding service and dynamics Compass Commercial provided.” — John Rice of Rice Properties (This is a condensed version, please click to read the full testimonial.)

“As part of the team that is responsible for selling bank-owned real estate, it is important we work with the best professionals in the market place. We are charged with selling the bank’s properties quickly and obtaining the highest price possible. This is where an experienced, dedicated and tenacious realtor is essential. I have had the pleasure of working with Ron Ross for the past nine months. Ron has listed and sold numerous pieces of property for the bank. Ron’s ability to take a complex deal and keep working it until it is fully completed and sold is unparalleled. Ron has been a real asset to our group.” — Gregg F. Weakley, VP/OREO Officer, Columbia State Bank

“For the past five years Compass Commercial Real Estate has been a preferred choice for marketing Columbia Bank’s central Oregon OREO portfolio. Whether formal listing services, strategic analysis or advisory services, Compass has served as a reliable partner in negotiating and closing our transactions at optimal value. A good brokerage firm meets the client’s needs; the exceptional brokerage firm anticipates them. Compass is the exception.” — Columbia State Bank

“We are residential and commercial builders and developers. We have worked with Ron Ross on our commercial properties. The most recent was a lease transaction. In a very tough leasing environment Ron found a tenant for our entire 6,000-square-foot-plus downtown Bend office building and negotiated a five-year lease deal. The negotiations proved to be tough and sticky, but Ron’s perseverance, patience and determination made the deal happen. We are grateful to Ron for all of his wise counsel and assistance on our commercial transactions and would whole heartedly recommend him to others.” —Mark Wilhite, President, Copperline Development Incorporated

“Of all the decisions I made regarding my recent real estate purchase, the best one I made was choosing Ron Ross as our broker. His knowledge, experience, and understanding of the marketplace are perfectly matched with his sincere and relaxed manner. From my first property tours to the online searches to the numerous walkthroughs, and during all the financial negotiations, Ron masterfully provided the support needed while allowing me the space to make this decision. Ron has earned my unqualified recommendation. If any prospective clients have questions about working with Ron, they are welcome to contact me.” —Eric Plantenberg, Humm Kombucha

“As an experienced real estate attorney, I’ve dealt with countless commercial real estate brokers over the years, but never one better than Ron Ross. I have the utmost respect for Ron’s abilities and integrity. For several months earlier this year, I worked closely with Ron to find a suitable commercial investment property in Oregon. Ron found a great prospect and was instrumental in all phases of the transaction, including negotiations with the seller’s agent, preparation of sale documents, due diligence review and analysis, and financing strategies. Ron was extremely diligent in responding to the numerous issues and complexities that arose, and showed great ingenuity in problem-solving. Ultimately, we were not successful in putting a deal together, as the seller became intransigent. However, no broker could have done more than Ron. I intend to work with Ron in any and all future transactions, and will gladly refer my clients to him as well.” —Steve Bennett, Powers, McCulloch & Bennett

“Being an inexperienced real estate investor I was initially a little nervous. Therefore my primary priority was to locate a Broker who would assertively protect my interests. I consulted two realtors whom I trusted, both recommended Ron Ross for my commercial real estate investment. As with many commercial transactions, challenges emerged. It was at that time that Ron’s experience and willingness to protect and defend my interests became evident. Ron’s willingness to take a strong stand and not back down made it possible for us to complete the transaction successfully. I will most certainly consider Ron Ross for my future commercial real estate investments.” —Paul Hansen, Investor