Portland State University’s Population Research Center reports that Oregon has surpassed a population of 4,000,000 people this year. Deschutes County has reached a preliminary estimated population of 170,740 and Bend contributes to almost half of that, reported at 81,310. 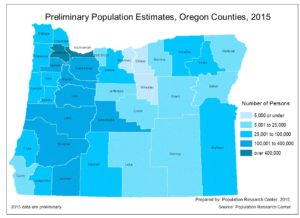 Changes in population occur naturally (births minus deaths), and due to net migration (people moving in minus people moving out).

Since the state began registering key events that impact population, there have been more births than deaths, creating a natural increase. Net migration is determined by subtracting natural increase from population change. Barring a few years during the mid-80’s when Oregon suffered a dramatic recession, there were more out-migrants than in-migrants, but a broader view each decade between censuses, shows net migration has always been positive.

Natural increase peaked during the baby boom of the 1950s, when net migration was at its lowest level. In the current decade, an aging population and fertility rates below replacement level have resulted in the lowest level of natural increase since the 1930s.

The highest levels of net migration have been attained during periods of strong employment growth, including the 1940s war effort and in the 1970s and 1990s.

To learn more about Oregon’s Road to 4 Million, check out PSU’s website which highlights information about the state’s population demographics.